As I was walking along the street a few weeks ago I met my neighbour with a contented smile on his face. I didn’t need to say “Hello, how are you?” It was obvious he was very well indeed. He explained that he had recently returned from two weeks in France, but then he continued: “The day I got back I went straight to this new brasserie near Piccadilly Circus” to stay ‘topped up’. It was so good, and unbelievably cheap, I’m going again tomorrow.”

With a recommendation like that you won’t be surprised that I earmarked Brasserie Zédel for a courtesy call. Though funnily enough it’s exactly the sort of place I wouldn’t go to when in France. When I’ve made the journey to Paris I like to nose out off the beaten track, romantic little restaurants where the chef is pushing the envelope with an innovative menu. But Brasserie Zédel is designed for a London home crowd à la recherche du temps perdu, a time when they would linger over a long lunch at a pavement café before receiving a bill for ten francs. It’s a true Parisian brasserie in the great, democratic European style, an ageless place to go to regularly and relax with friends. Yet its striking beaux arts decor and polished service lend a touch of glamour and lift it above the everyday.

Ah yes, the service. This is one aspect that is distinctly un-French. The doorman greets you with a smile and banter, and there are no raised eyebrows and pained scanning of the reservations book when you arrive. In fact there seems to be a genuine attempt at making an evening fun. 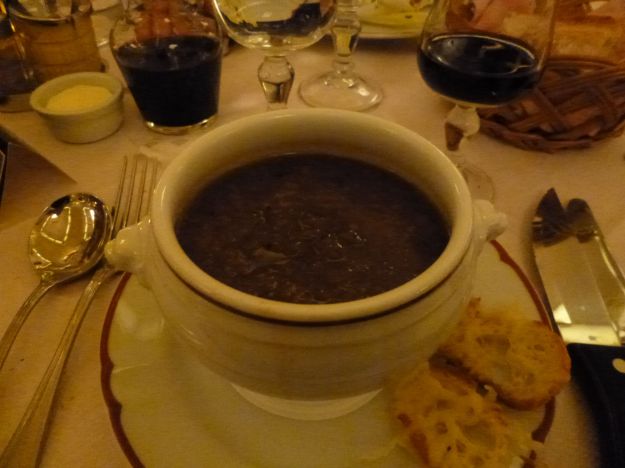 The menu of bistro classics is exactly what you might expect. No pyrotechnics but honest to goodness fare. We enjoyed taste-burst fish and onion soups, boeuf bourgignon and entrecote that fell apart in the mouth, and a little silver pot arranged with frites. A pichet of Corbieres completed the feast. Like my neighbour, I have already been back a second time.

But here’s the sequel. After having dinner in a packed restaurant where you can choose a two course prix fixe menu for £8.75 (though I’m not too sure about the grated carrots), my friend and I took off for Café Royal, recently reopened as a hotel, next door. On searching for the bar we were directed to The Grill Room which is really a swanky restaurant where you can just have a drink if you wish. Oscar Wilde and similarly louche sorts used to come here, and you can imagine their ghosts tucked away in a corner beneath the magnificently gilded mirrors, frescoed ceiling and statues of bare-breasted ladies supporting softly glowing lamps.

Sadly there were correspondingly few takers for single glasses of wine that cost more than dinner for two at Zédel. But we enjoyed our pricey cocktails, the staff (led by Paolo) were terrific and who wants to eat grated carrots anyway?