This week I went for a job interview at the glamorous Corinthia Hotel. As they were short-staffed I had to pitch in and help. No sooner had I put on my uniform than I was taking an order from a couple in the restaurant. Later on I had to deal with paparazzi who were hounding a celebrity guest.

I found myself running all over the hotel, from the spa in the basement to the penthouse at the top. I was put in my place by a bossy housekeeper and got ticked off by the maître d’ when my table settings weren’t up to scratch.

Yet after an hour or so I was summoned by the manager who said “You’re hired”.  I think by now you may have guessed that this “ job interview” wasn’t quite what it seems.

Cue action: Above and Beyond at London’s Corinthia Hotel.

In fact it was all part of Above and Beyond, a “one-on-one immersive theatre experience” currently being staged at the hotel by Look Left, Look Right.  These types of events, currently all the rage in London, are normally put on in dilapidated warehouses in less salubrious parts of town. The setting for Above and Beyond couldn’t possibly have been more different.

You really have to hand it to the Corinthia. They’ve taken stock of their location close by London’s galleries and theatres to create this daring “Artist in Residence programme” to illuminate what their hotel’s all about. But what a risk to stage it among guests paying upward of around £350 a night.

So, every evening for the past few weeks, 24 lucky participants have had individual time slots with a similar number of actors to experience life “back of house”. One minute you’re “working” with hotel staff, the next you’re plunged into nostalgic vignettes from the building’s earliest days. These include the half century or so leading up to 2010 when it was part of the UK’s Ministry of Defence.

I asked the Corinthia’s elegant Mistress of Ceremonies what guests make of actors and their audience careening along the corridors. Most are really intrigued, she said. And some have even taken part.

But what happens when things go awry, as they inevitably will? For me, it all started to go wrong when I got lost on the fifth floor. I ended up tailing a bona fide room service waiter serving dinner to a guest.  When the waiter disappeared, grumbling he was busy, a housekeeper tried to help me, suggesting I knock on a particular bedroom door. When I did, a surprised guest appeared in his dressing gown and slippers. I made my excuses and left. 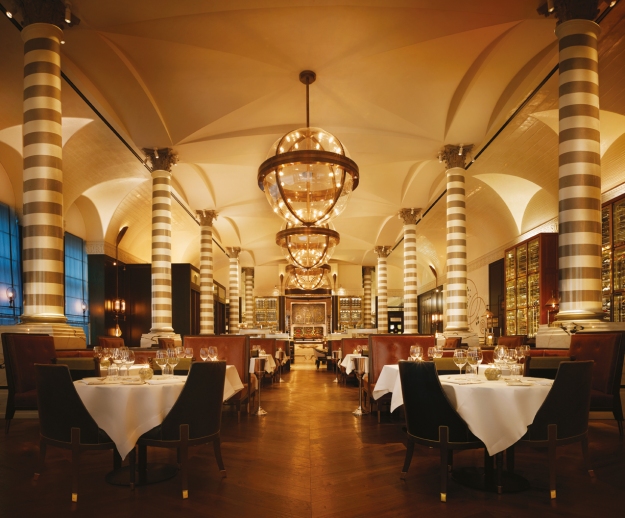 Scene of strange goings-on: Massimo Restaurant at the Corinthia Hotel.

Above and Beyond is now at the end of its sell-out run, but I’ll be closely watching as the Corinthia’s Artist in Residence programme evolves. I can’t wait to see what they’ll come up with next.