While Britain dithers over whether to build Boris Island or expand Heathrow I hear that Holland’s Schipol is positioning itself as London’s major airport. If so, maybe the reopening of the Rijksmuseum can be considered London’s hottest new cultural event.

Henry Moore exhibition in the gardens of Amsterdam’s Rijksmuseum.

So hop on a plane and head to Amsterdam fast. Because the museum has reopened after a 12-year closure with a stunning temporary Henry Moore show. It’s the icing on the rich and delicious cake that’s the makeover of the museum itself.

I arrived at the Rijksmuseum entrance as a rush hour stream of cyclists pedalled past. Their campaign to stop the proposed blocking of this route through the heart of the building was partly why the museum remained closed so long. I’d been warned there were huge queues to enter, but when I arrived at 9.05 I walked straight in. 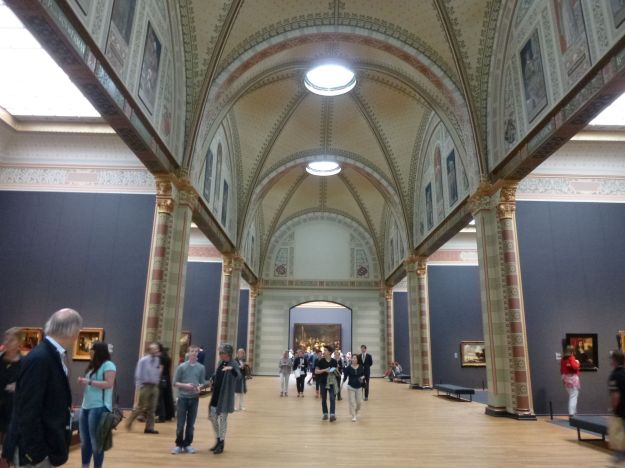 The Gallery of Honour, with Rembrandt’s Night Watch at the far end.

I hot-footed it to the Gallery of Honour where Dutch old masters are arrayed. It’s a magnificent sight, with alcoves of Golden Age works leading up to Rembrandt’s Night Watch, dramatically displayed at the far end.

When the museum was built in 1885  the names of featured artists were inscribed high on this gallery’s walls. The rehang of this revered space reveals a fascinating change of tastes. Frans Hals and Jan Steen are still here, Hobbema has gone and Vermeer (who, unbelievably, was unrated) has now been brought in. It’s wonderful to see his milkmaid calmly pouring from her jug centre stage—especially since I’d pipped the heaving scrum and had her all to myself.

The entire museum gets my resounding thumbs up for its brilliant integration of fine and decorative arts. The story of the Netherlands, against the backdrop of the sea, is vividly conveyed through skilful juxtapositions of paintings and objets d’art. Showcases of vases, clocks and pieces of furniture are set among pictures of similar age and style. I thrilled to items that would never normally grip me, such as silverware and porcelain.

The building itself is a treat. I followed an architecture trail that led from the decorative neo-Gothic Great Hall, with its stained glass windows, to the new Asian Pavilion, where works are displayed in zen-like calm.

Holland’s ties to the sea are visible throughout the Rijksmuseum. Objects mirror paintings throughout. 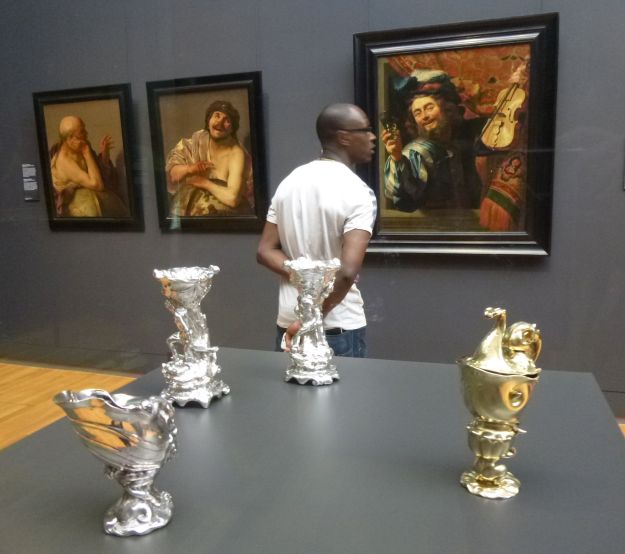 Paintings are matched with fabulous drinking cups covered in swirling sea creatures emerging from the waves.

Shiva Nataraja (King of the Dance), part of the excellent Asian collection, now has a stylish, light-flooded home.

A row of dazzling kimonos, ancient and modern.

The greenhouse supplies salads for the museum cafe.

When the Rijksmuseum closed for the evening I headed into its gardens, where the Moores were bathed in sun. I peeped into the greenhouse where vegetables for the lunches served in the museum cafe are grown. Then it was on to Sama Sebo, the Indonesian restaurant next door, for a first rate rijstafel. Fortunately I’d booked a table: it was shoulder-to-shoulder—just as the space in front of the Night Watch had become.

*Check out City Airport for an Amsterdam flight: save time and outrageous train fares to larger airports. Henry Moore is on until 29 September.