Things are stirring in a sleepy artists’ village a short drive out of London. Compton, just outside Guildford, was a thriving hub of creativity when Victorian painter and sculptor G.F. Watts lived there. But since his work fell from fashion many of the places associated with him suffered too. Now, they’re being brought back to life and visitors can once again revel in their very English mix of tradition and eccentricity.

Angelic figures cover the shadowy interior of the Watts Chapel. 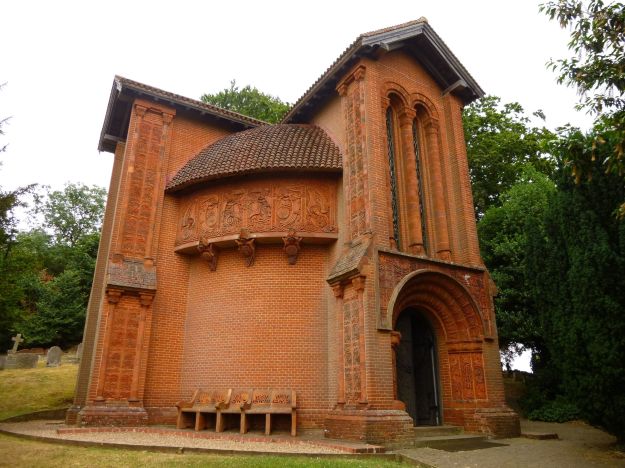 If you know one thing about Compton it’s likely to be the Arts and Crafts Watts Chapel that the artist’s wife, Mary, designed in memory of her husband. This Byzantine-style masterpiece is dazzlingly decorated inside and out. Celtic patterns and mystic faces jostle on its terracotta exterior. Inside, angels and cherubs with golden halos gaze down in the dark.

Nearby is the Watts Gallery, where works by the painter and his contemporaries are displayed on scarlet walls and sculptures threaten to burst out of tiny rooms. But the main reason for my recent trip to Compton was for a tour of Limnerslease, Watts’ studio and home.

Years ago this house, also in the Arts and Crafts style, was sold and subdivided into flats. But it recently came onto the market for sale. The Watts Gallery Trust is raising funds to purchase it, restore it and turn it into a centre for the arts and education. Once the £4.7 million has come in, It will play a major role in reviving Compton itself as a hub of contemporary creative work.

Visitors can book tours to view rooms with original features such as fireplaces and ceilings that Mary decorated with religious symbols and Hindu gods. Much has been lost but there are many original photographs taken in situ of Watts in his smoking cap and his ceramicist wife in her smock, surrounded by their work. Our guide, Jane Turner, conjured up wonderful images of Watts and his world. I really warmed to him when she told us that, at a time when women went around in corsets, he was a member of the Anti Tight Lacing Society.

Compton’s second lure was the Watts Gallery’s temporary exhibition of works by Frank Holl. Around 30 paintings shed light on the Victorians. Social realist works of women suffering in poverty hang alongside acclaimed portraits of eminent men such as Prime MInister William Gladstone. It’s a snapshot of a polarised world and a reminder of what has (and how much hasn’t) changed between then and now.

Inside the Watts Gallery at Compton: the artist’s model for Physical Energy, his sculpture in Hyde Park.

A fraction of the Tea Shop’s quirky teapot collection.

The gallery dates from 1904 and has recently emerged from a major restoration. It sits in a garden with an old-fashioned Tea Shop stacked with humorous teapots.  My cuppa came in a cheeky pig. The other great village watering hole is the 16th century Withies Inn, where you can shelter from the sun beneath a pergola and tuck into a trout or rack of lamb.

Frank Holl: Emerging from the Shadows. At the Watts Gallery until 3 November. Want to do more? The Pilgrim’s Way passes just outside the Tea Shop window, and a short walk brings you to Loseley House, with its noted gardens.