It’s a year since a red inverted table called The Shed appeared at London’s Southbank. This temporary theatre’s first play, appropriately set around a table passed down through generations of a family, kicked off a string of full-house hits. Now this rough timber building with a fringe vibe has had its planning licence extended until 2017. Could it end up a permanent landmark alongside its neighbouring once-temporary structure, the London Eye? As a showcase for edgy works that are tapping a new, younger audience, there seems no reason why it shouldn’t run and run.

It’s just one of three timber boxes that have freshly sprouted in London’s cultural hubs. A short amble along the Thames leads to another fizzing theatre: the Sam Wanamaker Playhouse at Shakespeare’s Globe. It’s also been packing ’em in since Bond girl Gemma Arterton took to the stage as the Duchess of Malfi a few months back.

The gorgeous candlelit interior of the Sam Wanamaker Playhouse at The Globe.

This intimate “jewel box” is a real feast for the senses. You don’t just wander in and sit down. You wait until invited to make your entrance: just stepping inside is a piece of theatre in itself. The scent of the hand-crafted oak auditorium wafts over you as you step among flickering beeswax candles, the only source of light. Then, as your eyes adjust to the dim glow they wander from the richly patterned backdrop up to the ceiling, a celestial scene of cherubs among clouds.

On the occasion of my audience with The Duchess, I took my seat as strolling minstrels in Elizabethan garb appeared onstage playing viols and lutes. Then came figures in fabulous ruffs and pantaloons bearing tapers. Chandeliers came spiralling down from the ceiling which they lit with great bravura to enthusiastic applause. Now it was time for the performance to begin. 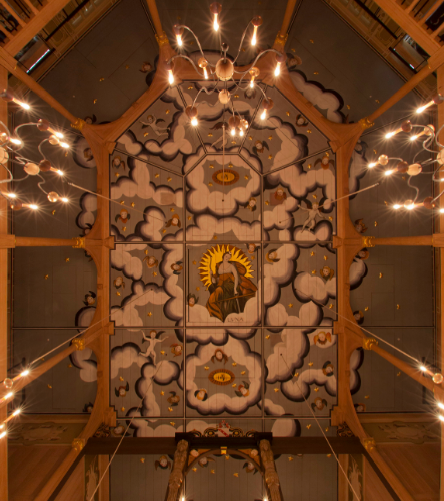 If the Sam Wanamaker has been designed to reflect a true Jacobean-era night out, right down to its bum-numbing benches, the opposite is true at the high-tech Milton Court Concert Hall. The Guildhall School of Music & Drama’s new performance space boasts indulgently bum-hugging seats. From its light-flooded glass lobby with a Martin Creed artwork to its white ceiling and walls, this 600-capacity hall feels fresh yet surprisingly intimate. And yes, it too features masses of wood—in this case sapele, a native African cousin of mahogany often used to make musical instruments. The acoustics are superb.

The Hall hosts concerts by the school’s musicians alongside performances by the Academy of Ancient Music and the Britten Sinfonia, bookable through the adjacent Barbican Centre. It’s part of a complex that also include two new theatres, which I’ve yet to sample but could well take my tally of beautiful new boxes to five.