This summer two “blockbuster” London exhibitions go head to head. In the first corner we have Life and Death in Pompeii and Herculaneum at the British Museum. Opposite, across town at the V&A, we have David Bowie is… 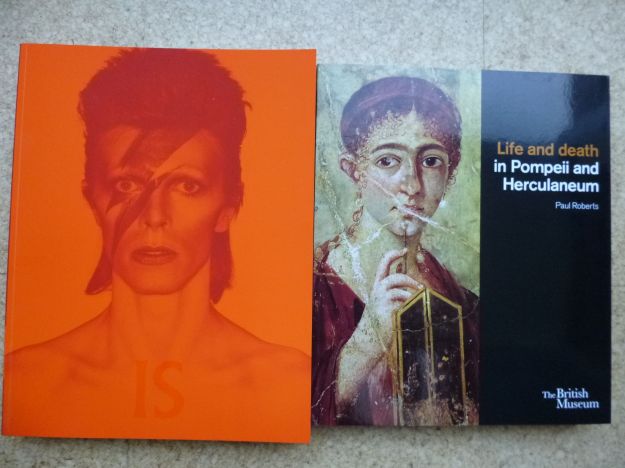 This season’s must-have coffee table ornaments: catalogues for David Bowie is… and Pompeii and Herculaneum

With 67,000 tickets pre-booked, Bowie has attracted more advance sales than any previous V&A show. Pompeii, which one reviewer even compared to the landmark 1972 Tutankhamun exhibition, has gone a step further with nearly 72,000 enthusiasts reserving slots before the opening day. What is it that’s got everyone scrambling to get in?

At first glance the two shows couldn’t be more different: the elegant, exquisitely presented British Museum exhibition versus Jean Genie and Rebel, Rebel pumping through headphones at the V&A.

But hang on a minute…

Going to the Pompeii show is like being invited to dinner at a Roman house minutes before Vesuvius starts to spew. Many of the exhibits are so intimate—a child’s wooden cradle charred by the heat, a table arrayed with trinkets to impress guests, a flask of the condiment du jour, fish sauce—you feel an instant bond with these people even though they lived in AD79. With the notable exception of a container to breed dormice for the cooking pot, the exhibits constantly remind you of how their lives resemble ours. 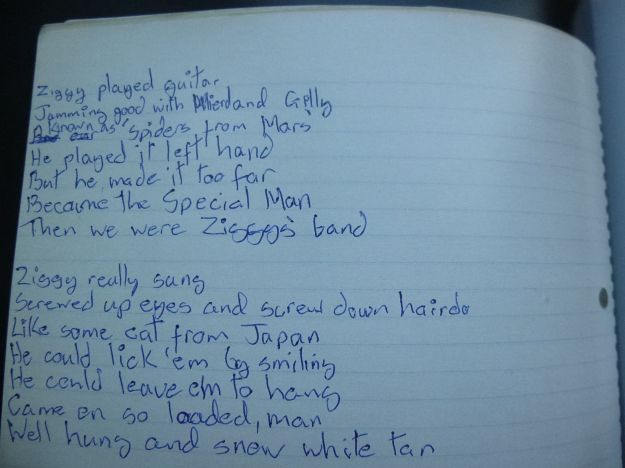 Origins of a legend: where Ziggy Stardust began.

The Bowie exhibition, too, is a walk-in scrapbook of minutiae that build into a living portrait of a time past. We have the pieces of paper that he scrawled his lyrics on and even a tissue with lipstick blotted from his lips. Of course there are the gorgeous costumes and enough high art (Die Brüke, Warhol and Gilbert and George) to elevate the show above the Rock ‘n Roll Hall of Fame. But I won’t forget the crowd of balding heads just inside the entrance completely spaced out by a video of Bowie playing Major Tom beneath a television shaped like a sputnik and an image of the moon. This is a snapshot of an era. And they were there.

Both shows still have months to run. You’ve seen the advance booking figures, but who will come out tops in the end? If the two venues want to really see visitor numbers skyrocket the British Museum could host evenings of drinks in the fabulous Roman garden they’ve created. (How about serving the favourite Pompeiian tipple of watered-down wine—perfect for these straitened times?) Meanwhile the V&A could deploy its Sennheiser headphones to run a silent disco among the vast screens pulsing with the Spiders from Mars.