It’s a centuries old tradition that come the warmer weather travellers set off from London for Canterbury. It was a rambling ride in Chaucer’s day. But thanks to the Mo Farah and Sarah Storey Javelin trains that zoom out of St Pancras, the journey now takes under an hour.

So, one bright Sunday morning I found myself sharing a southbound carriage with two young women on the Walk of Shame. Both were curled up asleep. Two pairs of sparkly, spiky heels formed a decorative arrangement on the table.

The conductor appeared and they confessed: “We have an issue”. Cue cleavage-waggling and an elaborate yarn about how they’d lost their tickets when some clothing went missing the previous night. Duly ejected at the next stop, they tottered off along the platform in their remaining party gear.

Our train plunged into the most beautiful bucolic scene: lush water meadows with cattle grazing among reeds and flowers. Eventually the towers of Canterbury Cathedral reared up behind, but the goal of my journey lay elsewhere. I’d come to see the newly refurbished Beaney House of Art & Knowledge—a rather academic name for a museum-cum-giant cabinet of curiosities that was huge fun to explore.

The Beaney House of Art and Knowledge in Canterbury.

Inside the newly refurbished galleries.

A fanciful 1899 building on the High Street, The Beaney’s doors open to some wonderful paintings, ranging from old masters to contemporary works. But I was equally taken by more unexpected displays. I admired a mummified Egyptian cat, a stuffed armadillo, a Venus flower basket (the skeleton of a sponge) and ancient garnet brooches dug up when the building was restored.

One of many curios: the Venus flower basket, a sponge skeleton.

But what I most enjoyed was making the acquaintance of two eccentric Victorian gentleman travellers and the quirky treasures they brought back.

One, Stephen Lushington, was both MP for Canterbury and Governor of Madras. Jane Austen wrote of him: “He is quite an MP. I am rather in love with him. I dare say he is ambitious and insincere.” He returned home with a huge collection featuring a sword guard with a demon devouring an elephant and a mace decorated with intricate flowers.

And then there was the Reverend Henry Landsell, whose adventures took him across Asia during the 1870s. There are photographs of him posing in outrageous local costumes in Siberia and the Stans. From Kashgar he brought back a leather face slapper, captioned “for slapping naughty women’s faces in prisons”. From Burma came decorative objects ransacked from the Royal Palace of Mandalay. More practical were the embroidered trousers he bought in a Tashkent bazaar, which he found “warm and useful” when travelling by horse.

I could have spent hours sitting on the Beaney’s little portable stools, peering at every detail of these intriguing objects. But a late lunch called, so it was off to The Goods Shed, for melt-in-the-mouth roast beef and a vegetable platter. We sat at wooden tables on a dais above the farmer’s market in full swing to one side. I’m sure that every carrot, splash of oil and slice of bread came straight from the organic stalls busy with shoppers down below. Great atmosphere, great food. 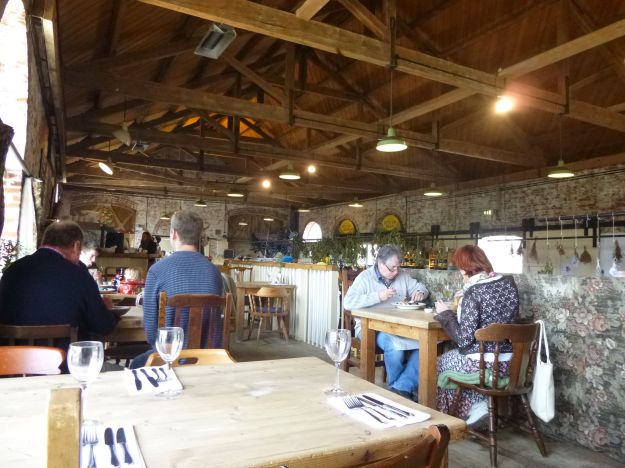 As I sipped my locally brewed beer I suddenly remembered those two girls on the train. Were they still staggering back home on their stilettos? Or had they managed to bamboozle another ticket inspector with a more convincing Canterbury tale?