If London’s Bond Street is synonymous with excess and the extraordinary, now’s the time to catch it at its most exuberant. Glamorous peacock feather illuminations arch over designer stores in full Christmas plumage. But best of all its galleries and auction houses have pulled out all the stops with several must-see shows.

I dodged the faux snow cannoning out of Fenwick and braved the Victoria’s Secret scrum to check out what is an exceptional crop of art exhibitions, free for public view. All feature a small number of works, beautifully displayed in calm surroundings—perfect for a gentle stroll at a time of year that threatens sensual overload. Here are my favourite three.

1. Bonhams. 101 New Bond Street. Burrell at Bonhams. A selection of eclectic masterpieces from The Burrell Collection in Glasgow is arranged around the magnificent Wagner Garden Carpet, an Iranian paradise of watercourses filled with fishes, exotic trees and flowers, animals and birds. The many highlights include a poignant Giovanni Bellini Madonna and Child, Paul Cézanne’s glimmering Château de Médan and a 1480 tapestry showing King David dispatching his page with a message to entice Bathsheba to his bed. There’s the elaborate bedhead that failed to work its magic on the wedding night of King Henry VIII and Anne of Cleves, and treasures hailing from Egypt and Assyria. Soft background music was playing as I roamed around: a Chinese pipa strummed while I peered at a Yuan Dynasty jade vase and as I arrived in front of a Degas ballet scene it segued into an orchestra playing Debussy. 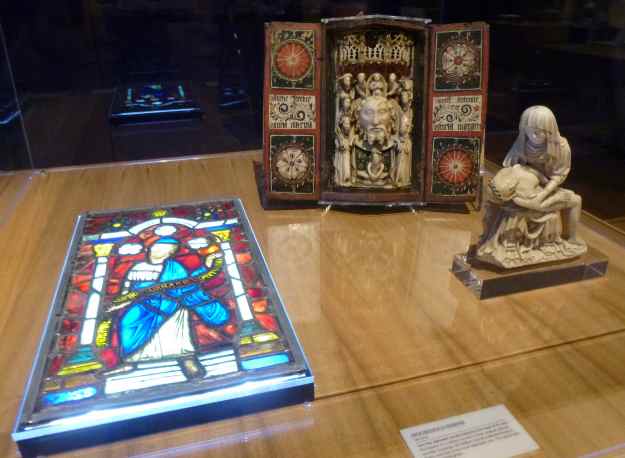 Medieval works, including stained glass and an alabaster house shrine.

2. Christie’s Mayfair. 103 New Bond Street.The Bad Shepherd. I came to see the two splendid Brueghels of a smirking shepherd scarpering while a wolf devours his sheep, and a good shepherd being mauled by a wolf as he allows his flock to escape. But I was just as taken by the haunting waterscapes by contemporary artist Peter Doig, all atmosphere and crunchy textures, presented as “in conversation” with the early Flemish works. There was Jan Brueghel’s flower painting with its overblown blooms, a lively peasant scene that turned out to be The Murder of the Innocents and Jeff Koons’ saccharine, yet disturbing cherubs—all hinting that beneath a beguiling exterior lie more troubling elements. As if to underline this, the works are presented in a series of stylish yet darkly claustrophobic rooms. 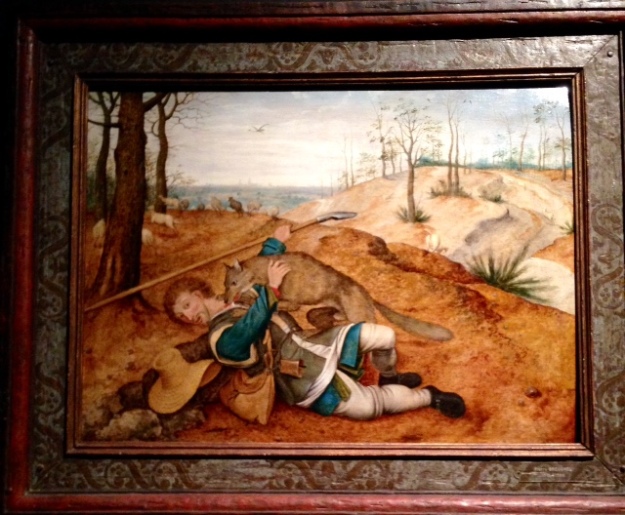 3.  De Pury de Pury 3 Grafton Street. Wojciech Fangor: Colour Light Space. A few steps off Bond Street brought me to this collection of 1960s and 70s works from the US-based Polish artist Wojciech Fangor. These Op Art paintings were shown to great effect in a Grade I listed Georgian townhouse replete with a sweeping onyx staircase, decorative ceilings and giant chandeliers. The works positively vibrated with—well—colour, light and a feeling of infinite space.  I drifted among them, relishing the blurry forms and subtle gradations of hue that made them shudder and pulsate. 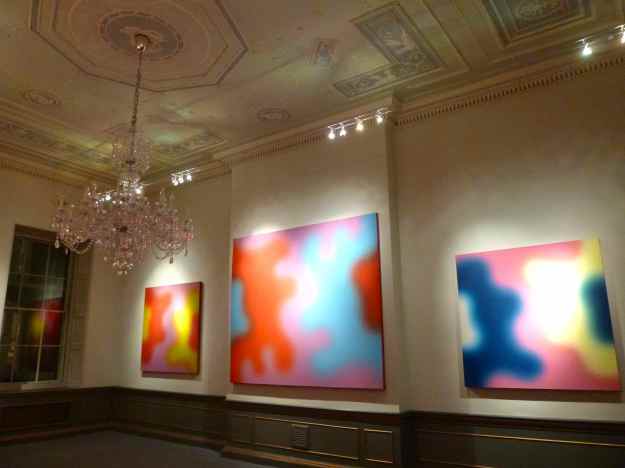 Modern works in a London townhouse dating from 1767.

Rippling forms beneath a dazzling ceiling.

The great pleasure of visiting these small galleries is that you avoid the blockbuster crowds. Much as I adored the National Gallery’s Rembrandt: The Late Works, it was particularly pleasurable to view the artist’s self-portrait at Bonhams without having to elbow my way to the front.

Shows run into early January 2015. Opening hours vary over the holiday season. Please check before making a visit and note the exhibition opening hours may differ from those of those of the auction house itself.